by Vanessa Zainzinger, special to C&EN

The Winding Path Out of the Lab > Case Study 2: Bringing an Orphan Drug to Market

Approval by the US Food and Drug Administration is a shining moment for any drug and the company that is bringing it to market. But before drug molecules reach that point, they have typically traveled long and tortuous paths.

Lonafarnib, for example, is the active ingredient in Zokinvy, which the FDA approved in 2020 as a treatment for the ultrarare disease progeria. It started life as a potential cancer drug from Merck & Co. before a different company repurposed it for the new use.

Squalamine, which has completed a successful Phase 2 trial as a Parkinson’s disease treatment, was less successful when tested as a therapy for both cancer and wet macular degeneration. And sodium chlorite, in development to treat amyotrophic lateral sclerosis, now has a new developer after its original one went out of business.

Drug molecules routinely go through many such twists and turns. And most never make it to market. So for the companies that are developing them, any calm is welcome. Read on for three stories of biotech firms that are relying on outsourcing partners for one bit of stability: a solid source of their molecules. 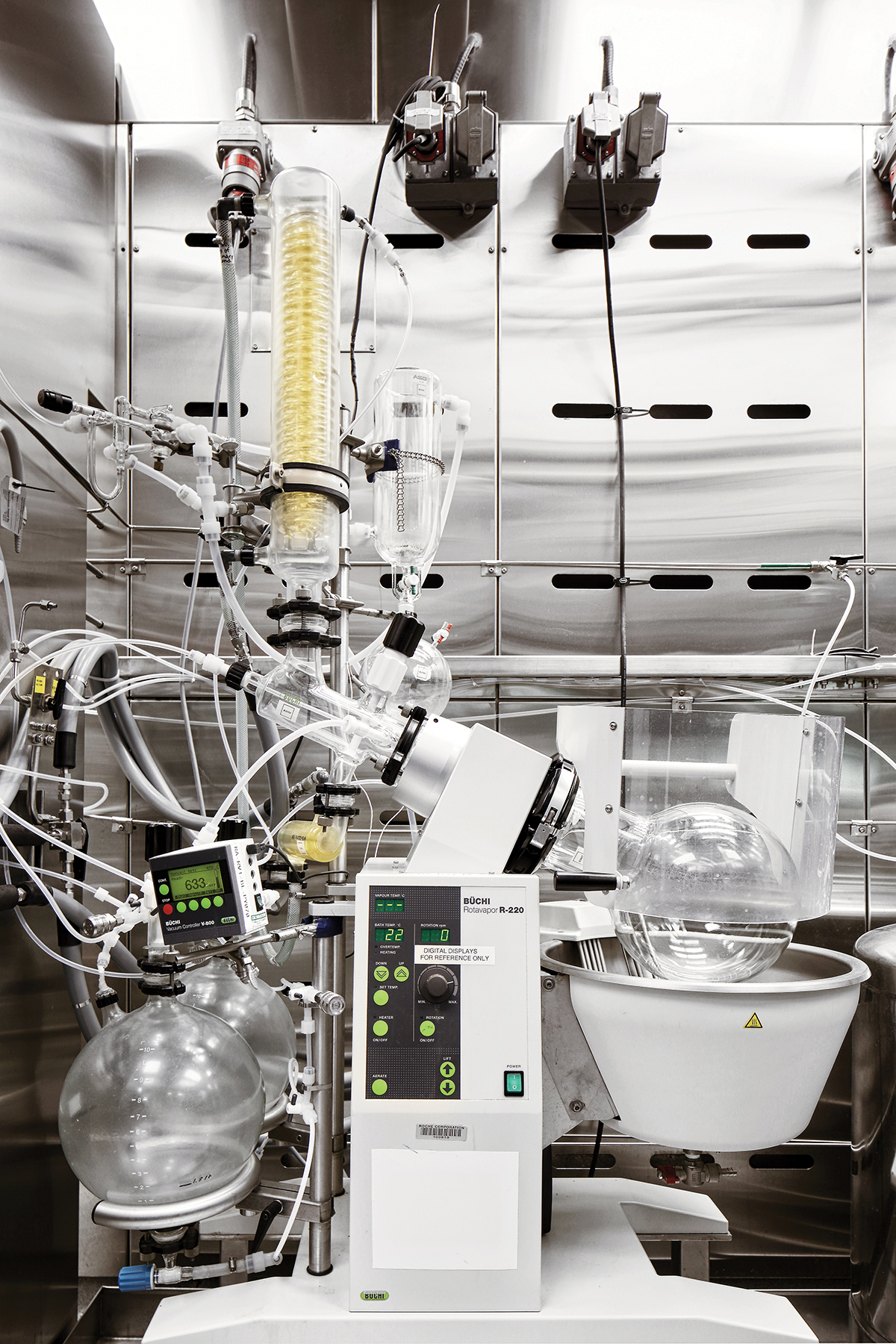 It is estimated that 400 children worldwide have progeria, also known as Hutchinson-Gilford progeria syndrome. Children with this extremely rare disease, which causes genetic, premature aging, typically die of heart disease at an average age of 14.5 years.

In November 2020, the California-based firm Eiger BioPharmaceuticals gained US Food and Drug Administration approval for lonafarnib, the first therapy for progeria. The drug, sold under the trade name Zokinvy, is not a cure, but it increases the life spans of people with progeria by an average of 4.3 years, and often longer, according to clinical trial results.

“We now have young adults on Zokinvy who started in our trials when they were 7, 8 years old, living into their early and mid-20s,” says Eiger’s CEO, David Cory. “One of them, Sammy Basso, just turned 26 and finished his master’s degree in genetics. Patients like that are an inspiration to all of us at Eiger.”

ZOKINVY AT A GLANCE

Eiger did not set out to develop lonafarnib for progeria, Cory says. The company licensed the compound in 2010 from Merck & Co., where it was in development as a cancer treatment. Eiger planned to repurpose the drug to treat hepatitis D, the most deadly form of human viral hepatitis.

In its clinical trials, Merck had dosed more than 2,000 people with cancer with lonafarnib and shown that it can block prenylation, the attachment of a lipid to a protein. The pharmaceutical giant was using the compound to target Ras proteins, which require prenylation and are frequently mutated in human cancers.

Eiger engaged with Merck because it wanted to explore using lonafarnib to block prenylation in the hepatitis D virus life cycle, Cory says. “During this process, we were introduced by Merck to the Progeria Research Foundation, which had found that this same prenylation pathway was involved in probably the most ultrarare disease known,” he recalls.

Cory thought Eiger could bring lonafarnib to market to treat this deadly disease, progeria, while continuing to develop it for hepatitis D. In progeria, a single-letter misspelling in a gene creates an abnormality in lamin A, a protein in the membrane surrounding the cell’s nucleus. The abnormal lamin A is called progerin. Lonafarnib blocks lamin A prenylation and thus reduces the production of progerin, which is what accumulates in cells and causes rapid aging.

Eiger was able to demonstrate the mechanism quickly. Gathering participants for trials of drugs for rare diseases can pose a challenge. But the Progeria Research Foundation oversaw efforts to bring children from around the world to Boston Children’s Hospital. Eiger was able to conduct clinical trials with 62 patients, and the results demonstrated a survival benefit in children with the disease.

In 2015, Eiger hired CordenPharma, a contract development and manufacturing organization (CDMO), to work on the registration, validation, and commercialization of lonafarnib, starting with the manufacturing of material for Phase 2 clinical trials.

The company was recommended as a good manufacturer for this particular molecule, says Christopher Kurtz, Eiger’s chief technical officer. One prerequisite was finding a firm that could handle the challenges of producing a so-called orphan drug and was willing to make kilogram quantities rather than the hundreds of metric tons often required for treatments for more common diseases.

Orphan drugs are not a large part of CordenPharma’s portfolio, says Brian McCudden, managing director of the Colorado site where the work on lonafarnib is taking place. But the CDMO has multipurpose manufacturing facilities that can handle production at any scale.

The challenges of making an orphan drug are multifold. Fewer batches means fewer changes to learn lessons that could increase process efficiency, McCudden says. “So it’s a slower ramp-up curve on the efficiency with an orphan drug than you would have with a drug that you make a lot of in a year.”

Still, Robert Busch, technical lead for CordenPharma Colorado, says his team was able to make a lot of process improvements along the way. “With pharmaceutical manufacturing there’s always challenges when you scale up and you go to new equipment trains,” he says. “We discovered more critical process parameters that were unknown to Schering-Plough,” which developed the compound in the 1990s before it was acquired by Merck.

Busch adds that he was impressed with Eiger’s thorough technology-transfer package and the collaborative approach the biotech firm took to working with the CDMO. “They’ve been rolling with all the punches that come with pharmaceutical manufacturing,” he says.

For Eiger, making a drug for a disease as rare as progeria also brought with it an economic challenge. “There’s a fixed cost associated with meeting all the regulatory requirements to get drugs approved that is kind of independent of the scale at which you’re doing it,” Kurtz says. “So it’s very, very expensive for a pharmaceutical company to bring a product to market for a really small number of patients.”

Eiger does not expect Zokinvy to become profitable, even though the firm is poised to win approval from the European Medicines Agency later this year and is eyeing expansion to countries including Israel, Japan, and Turkey. Every year, roughly one child with progeria is born in the US and one in western Europe. “It’s a small population but an unmet medical need that we believed was definitely our mission and vision,” Cory says.

Cory helped develop the rare-disease drug epoprostenol, the first treatment approved for pulmonary arterial hypertension, during a 12-year career at GSK. Cory says he grew to realize that there was a world of people with rare diseases who are underserved. He has been working in biotech companies developing drugs for rare diseases since 2000 and cofounded Eiger in 2008.

The biotech has built a pipeline of molecules with “breakthrough therapy” designation, a sought-after FDA label for drug candidates for unmet clinical needs. Besides Zokinvy, Eiger is developing molecules that tackle hepatitis D, COVID-19, congenital hyperinsulinism, and postbariatric hypoglycemia.

Developing lonafarnib for hepatitis D will be a much bigger commercial opportunity for Eiger. The disease affects approximately 12 million people globally. Eiger is testing lonafarnib on more than 400 people with hepatitis D and expects initial results by the end of this year.

Vanessa Zainzinger is a freelance writer who covers the chemical industry

Cookie Settings
We use cookies on our website. While some of them are mandatory, others are not, but help us to improve our online offer and operate economically.

The Cookie Settings consent includes cookies selected by you, the associated storage of information on your terminal device, and subsequent reading and processing of personal data.

If you would like to select only Statistics or Marketing check the respective box category and then click Save & Close.

Celebrations included a garden party with a festive banquet of foods from Italy, Germany, France, & US, games, marshmallow roasting, custom beer steins and other 15 Year gifts, and balloons stuffed with prizes. All employees then heard a speech from Managing Director Brian McCudden and COO Dr. Lee Newton.

Celebrations included a garden party with German-themed breakfast, lunch or dinner buffets, 15 Year custom cakes and gifts distributed to all employees, along with a speech from Managing Director Luca Porcu and VP of Platform Management & Marketing Stephen Houldsworth.

Celebrations included an introduction of our core values, followed by playful games to implement them, distribution of 15 year bags, food and a live band in a garden party. Employees heard from Managing Director Dr. Juerg Burger and VP of Human Resources Stefanie Gerber.

Celebrations were split into 3 groups to cover all shifts and included a festive room with a 3 course buffet meal, 15 Year custom gift bags with locally-brewed beer, and a welcome speech by Site Business Development Christina Simons and CEO Dr. Michael Quirmbach.

Celebrations continued 4 times throughout the day & night to cover all shifts, and included a multi-course German lunch or dinner with brezel, speeches by Managing Director Fabrizio Fiordigiglio and VP of Sales Dr. Mimoun Ayoub, followed by a festive garden gazebo for the 15 Year gift distribution of Prosecco and backpacks.

Celebrations included a boat ride to Brussels City Center, followed by 3 groups taking guided bike or walking tours of secret places along the canal or the Tour & Taxis building. The party finished with a BBQ dinner and speeches from Managing Director Dr. Jean-Luc Dewez and VP General Counsel Nicolas Reischer.

Brittany earned her Ph.D. in organic chemistry from Wake Forest University (Winston-Salem, NC) and her B.S. degree in Chemistry from Emory University (Atlanta, GA). She also was an American Heart Association postdoctoral fellow at the University of Illinois at Chicago, Department of Medicinal Chemistry & Pharmacognosy. Brittany has been an active member of the American Chemical Society since 1995.

Click Here to inform us of any urgent questions or concerns.
CEO Video Update